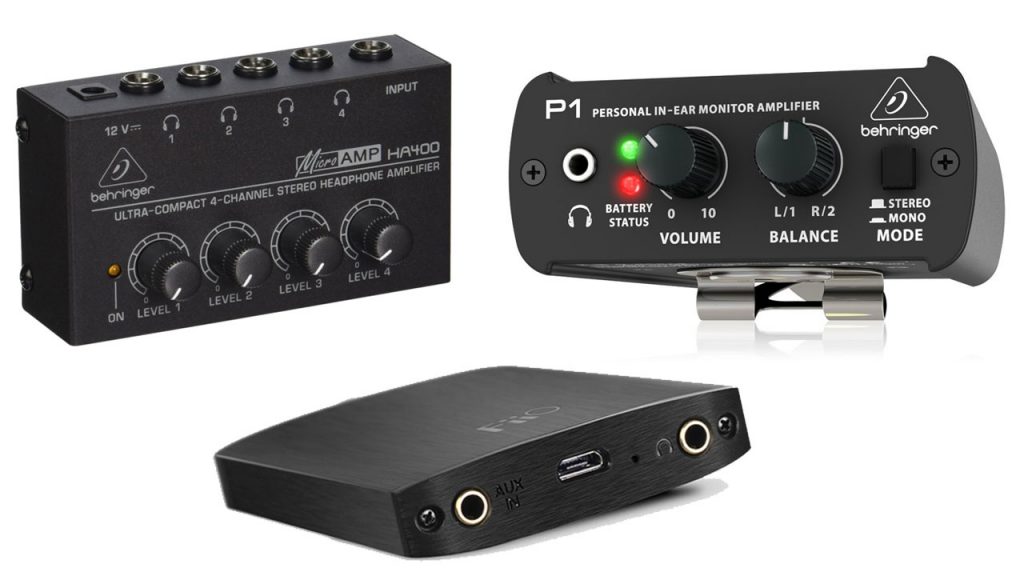 Headphone preamp, which are the best models?

When after so much work the moment finally comes when you are ready to record with other people, you realize how huge this step is, first of all because you are scared of inviting other musicians into your studio for the first time, second because you are aware of having to make some changes in your set up. And most people start this journey by purchasing a headphone amplifier (also called a headphone preamp).

If you have already done some research on this, you will surely have realized how many options are available on the market and how vast the choice is both in terms of functionality and price.

To help you better understand and direct you to the right choice for your needs, in today’s article we will analyze and compare the 7 best headphone amplifiers present on the market.

But before we start:

CATEGORIES OF HEADPHONE AMPLIFIERS ON THE MARKET

All headphone amplifiers fall into one of the following categories:

Desktop amplifiers represent the cheapest and most basic category in the headphone amp landscape and have the function of separating the headphone output into four, so that more people can listen to the mix at the same time. This will be the ideal solution for most home studios, thanks to its small size, ease of use and low cost.

BEST OF THIS CATEGORY: 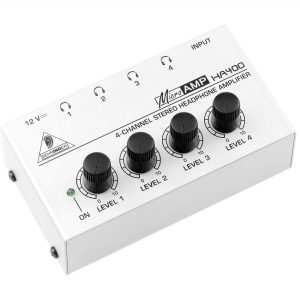 We are talking about the cheapest option on the market, without rivals from this point of view. A common problem with amplifiers in this price range is the lack of an external power supply, which causes high volume loss when the signal is split into four parts.

The MicroAMP HA400 is instead equipped with an external power supply, which allows the device to supply the volume at the original levels on each channel.

If you are still skeptical about this device due to its truly “ridiculous” price, do not hesitate to do a search on the net, you will find hundreds of favorable reviews of this device. 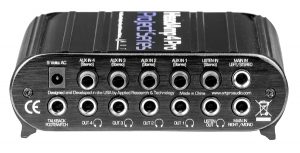 noise in the signal. This is not usually a big problem when monitoring with headphones (you don’t usually look for listening quality at this juncture), but if you don’t want to live with this “problem”, you can add a few more euros and address when purchasing the ART HeadAmp 4.

This amplifier has the same basic functions as the Behringer, but with better signal cleanliness. A nice novelty in this device is the presence of both ¼ “and 1/8” headphone inputs, in order to satisfy both the professional headphone user and the consumer user at the same time.

More expensive than the previously mentioned models, but without a shadow of a doubt, the best, for all reasons of 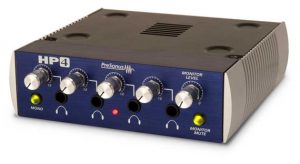 Many home studios after several upgrades reach the rack configuration for their hardware devices; this solution is also the preferred one on practically all live stages.

Comparing the rack amplifiers with the desktop amplifiers, the former certainly offer more features and more channels, but at a certainly higher price, which is between 150 and 300 euros.

The best amps in this category were found to be:

This is the cheapest solution of the three considered, but despite the price it is the one that offers the greatest number of channels (8) and some interesting functions.

The device has outputs on both the front and rear side, allowing a connection on the rear side in the case of “prolonged” use and the possibility of using the front ones when there is a need to change often.

Unlike desktop amplifiers, the Powerplay Pro-8 has two main stereo inputs, with the ability to switch on each channel.

The Behringer house model turns out to be a certainly valid and economical solution, it does not appear to be however devoid of weaknesses. If you want to avoid them and have a few more euros to invest, the ART HeadAmp6 Pro is definitely our advice.

Now we will explain why:

a problem with the HA8000 is that it does not offer the ability to control the mix between the input input and the stereo mix on each channel, thus rendering the function useless. The ART house model, on the other hand, has this characteristic, which distinguishes it from all the amplifier models seen so far. Keep in mind that if you need to record with multiple musicians at the same time, this feature is essential.

This is the more expensive alternative within the rack models considered by us, a price however amply justified by its spectacular features.

This model has the same functionality as the HeadAmp6 Pro, with the addition of some important features:

The only negative note that we would like to mention regarding the Presonus is regarding the switch, which is positioned on the back of the device; flaw yes, but on which you can turn a blind eye considering the high quality of the amplifier.

If you are a musician I think you have a clear idea of the situation we are going to describe to you, if you are not yet, trust that it is absolutely not pleasant:

Sound engineer: is it high enough?

Musician: no, I don’t hear

Musician: turn it down, it’s too high

This is a typical situation of a check sound before a concert, which is constantly witnessed; the cause comes from the fact that rack amplifiers do not allow musicians to directly control their volumes, but leave this task to the engineers.

A second problem that derives directly from this is the fact that when a musician does not “hear”, he begins to intervene on the volume of his instrument, creating chaos and eliminating the work of the sound engineer carried out up to that moment.

The ideal situation would be the presence of a mixer for each musician so that he can control what he hears in the headphones; in this way the musicians can adjust their volumes to their liking and the sound engineer can devote himself to other tasks.

The only way to create a situation like this is by using a headphone distribution system.

headphones and more. The hub of the device is the P16-I, capable of offering 16 input channels (16 balanced TRS analog inputs or 2 (8 channels) digital inputs. These channels can be sent up to 6 personal P16-M mixers, which can be purchased separately according to your needs, giving the possibility to musicians to create their own mix in headphones without interfering with the other members of the group.

In case you need more than 6 mixers, the Behringer P16-D expander (also available separately), will give you the possibility to add another 8, and since the mixers are powered via ethernet they can be positioned even at great distances without that the signal acquires significant losses.

Here are the prices for each item:

Some alternatives to Powerplay are:

even if we don’t feel like recommending them, as their additional features are justified by such a high cost.

If you want to have your own mixers, but your budget doesn’t allow it, Behringer offers another possibility: the Behringer MicroMON MA 400 . 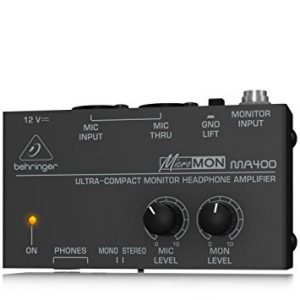 The reason for its low price is that it offers some features in a different way. Instead of receiving multiple outputs from the sound card, the MA400 mixes a single stereo channel with a direct / thru input from the live microphone, allowing it to be coupled to any amplifier presented in this list.

Clearly this solution is not without its flaws, and its greatest is that the “more-me” channel will have none of the effects of the mix.

We cannot certainly say that it is ideal, but it turns out to be a good compromise in the case of limited budgets.

Have you found a headphone preamp that fits your needs? Then share this article.