The best programs for audio editing

Audio editing, that is, everything that references to creation and / or modification of digital audio, is certainly a very interesting aspect, but it needs the right programs to be carried out in the best way. 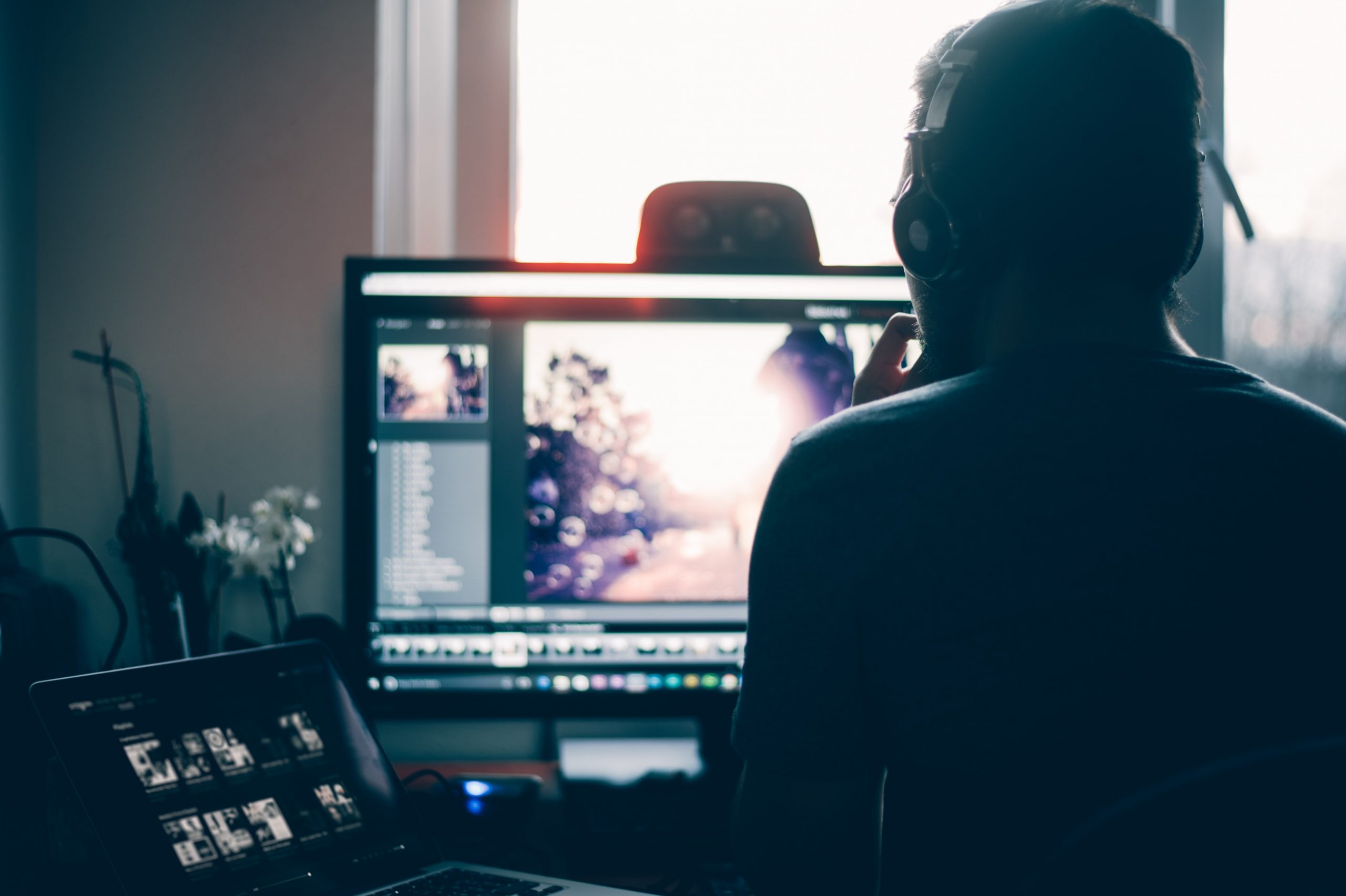 There are many reasons that can lead to be interested in audio editing. From YouTube videos to prospect of a career in film , passing through music production and editing, up to simpler goals, such as the creation of ringtones for your phone.

Regardless of what the purpose may be, it is always necessary to exploit the potential of a audio editing software . In this article we will describe the 15 best tools for your computer (both Mac and Windows).

Choosing good audio editing software or a digital audio workstation (DAW) can be a chore quite off-putting , given that there is a great variety of software on the market and it is not easy to choose the one that best suits us.

Some are free, others offer additional features, still others are specific to a particular operating system and so on. Let’s try to understand together how to find the right audio editing software.

Adobe Audition is undoubtedly one of the best audio editing software. The app includes some truly exceptional features, enhanced by the Adobe team’s many years of experience building powerful applications for professional users. 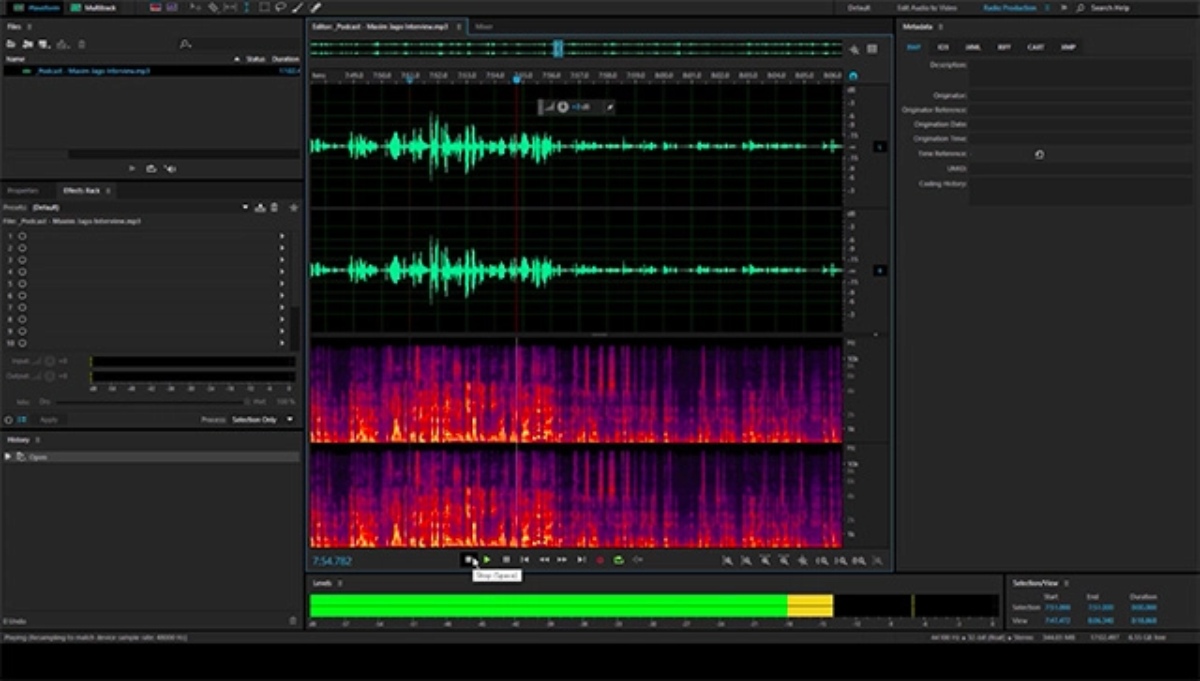 Audition comes with features like multitrack editing and mixing that will allow the user to live an audio editing experience much simpler and more efficient.

The software also has a feature called “Auto Ducking” which it uses Adobe’s proprietary technology based on artificial intelligence “Adobe Sensei” to understand the points where you prefer to lower the volume of a background track to bring out the voice.

Audition also has many plug-ins and Adobe also offers a series of tutorials to make it even easier to use this application.

In addition, it should be emphasized that the app has a really well structured and intuitive interface. Finally, Audition supports most audio formats available as MP3, WAV, AC-3, AIF, AIFF, AIFC, AAC, HE-AAC, CAF, FLAC, PCM, OGG, WMA and more, along with support for video formats like AVI, MP4, MOV, FLV .

Among audio editing software, Apple’s Logic Pro X should also be considered as one of the best tools , although it’s meant specifically for systems running macOS (and that’s a bit of a limitation). 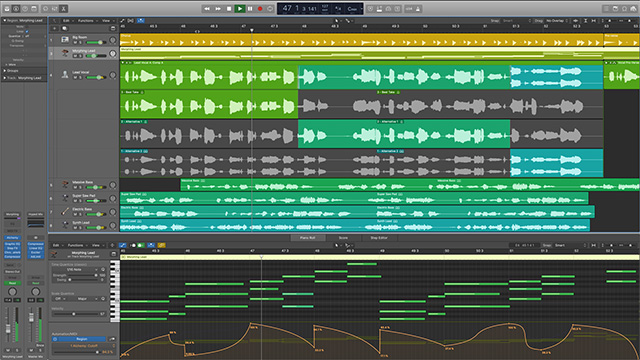 However, Logic Pro X does provide some superlative features, which make it an extraordinary one audio editing app not only for beginners, but also for professional users.

Logic Pro X comes with all the basic features you might need in an audio editor, along with other extremely advanced features, such as the ability to automatically match the times of different tracks in a project using “Smart Tempo”.

In Logic Pro X we also find “Flex Time” , which allows you to individually change the tempo of a single note in a waveform, without having to cut it out of the clip itself. “Flex Pitch” does the same thing for individual beats.

Logic Pro X also features an “arpeggiator” that it can automatically convert chords into arpeggios , in such a way as to give the music a more complex aspect. Many pre-recorded sounds and patches are also available with this app, along with an exaggerated amount of plug-ins.

Audacity is one of the most popular audio editing software out there. Free and open source , this tool provides almost all the features you need.

Audacity features many effects, including bass, treble, distortion, noise removal, and more. Apart from that, the software also includes analysis tools such as beat finder , silent finder and sound finder. 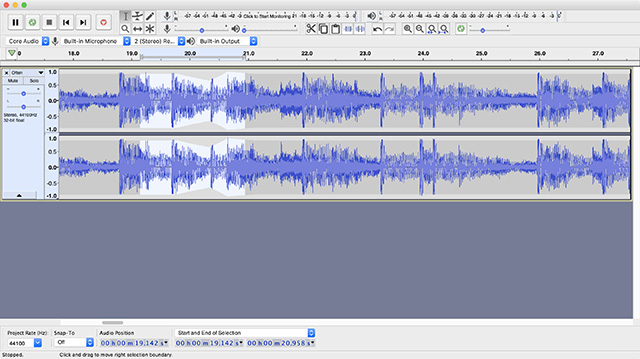 Considering that we are facing a free app that is also multiplatform , the features of Audacity are really many, and this is also what makes it so appreciated and sought after.

Reaper is another audio editing software particularly powerful and feature rich. For those who want to get started with audio editing, Reaper comes with support for multiple tracks and with a remarkable multi-channel support which provides 64 channels on each track.

With Reaper it’s possible directly record audio to mono audio file , stereo or even multi-channel, as well as recording on multiple discs at the same time. 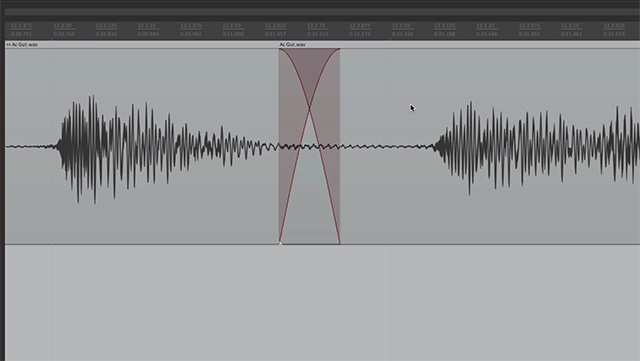 The tool allows you to apply effects in real time, insert almost any MIDI plug-in or third-party and even bring real-time pitch shifting and time stretching capabilities into the mix.

In addition to functionality, Reaper’s interface is also fully customizable.

Are you looking for a remarkable audio editing software? Well, FL Studio it is undoubtedly a tool to be taken into consideration with great attention.

Just think that it is used by artists such as Martin Garrix and Porter Robinson precisely because it is a first-rate software for audio file editing. 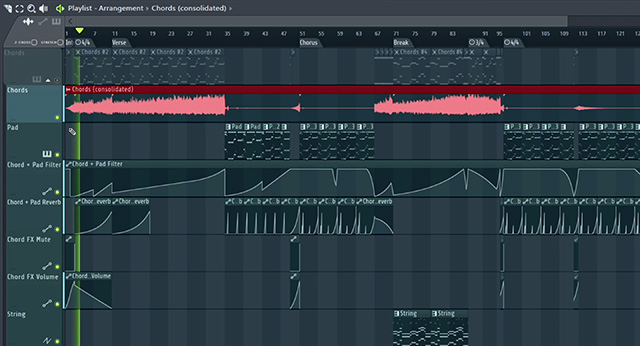 With this tool you can take advantage of the support for the multitrack recording , time stretching and pitch shifting. FL Studio comes with a mixer that offers several features, such as effect chains, automation , delay compensation and more.

In addition, with FL Studio they are guaranteed beyond 80 plug-ins ready to use and a huge number of usable instruments in your track.

Ableton Live really offers a ton of features. For starters, Ableton Live is capable of support audio tracks and unlimited MIDI, so you can put as many levels of tracks as you need into your project.

There is also support for MIDI acquisition, 256 mono input channels and 256 mono output channels. In addition to that, with Ableton Live you can take advantage of 70 GB of pre-recorded sounds , up to 15 software instruments and up to 46 audio effects. 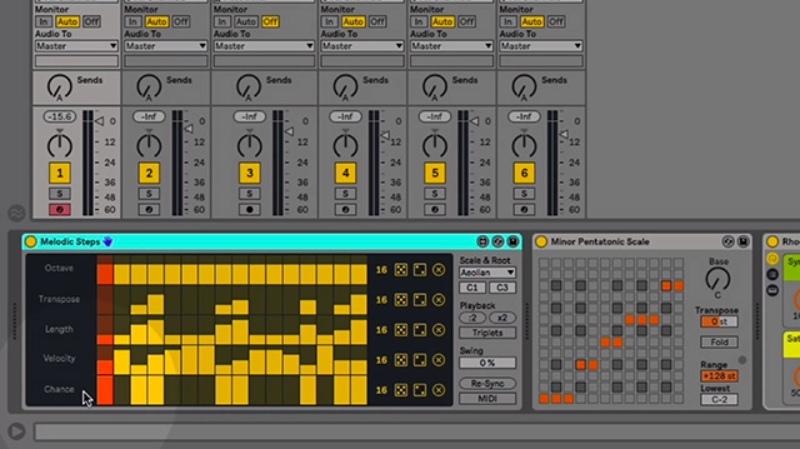 However, Ableton Live turns out lacks some features which are common in most other audio editing software. For example, there is no pitch correction, while the addition of effects such as the fades it is not as easy as with other software (eg Logic Pro X).

However, Ableton Live is still one of the most popular DAWs, especially for the production of electronic music . Guaranteed support for almost all available file formats, including WAV, AIFF, AIFF-C, FLAC, OGG Vorbis, RIFF, PCM, MP3.

Cubase is another audio editing software that is really worth checking out. The simple fact that it was used by the likes of Zedd and Junkie XL It says a lot about how qualitative this DAW is. 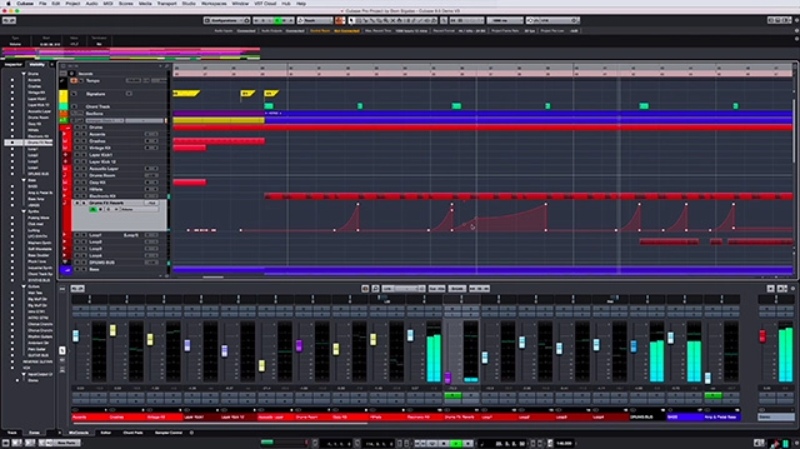 Plus, if you use plug-ins, Sentinel plugin will automatically scan them at startup to make sure they are valid and do not damage your system.

Also worth mentioning is a feature called Audio-ins which allows you to use filters and effects separately on your audio tracks. Cubase can also be tested for free , in order to be able to verify its potential before proceeding with a possible purchase.

Presonus Studio One 4 is a versatile DAW, featuring many interesting and useful features . In addition to support for multiple tracks, with Studio One’s Chord Track feature we can easily create a quick prototype of songs and get an idea of how they sound. 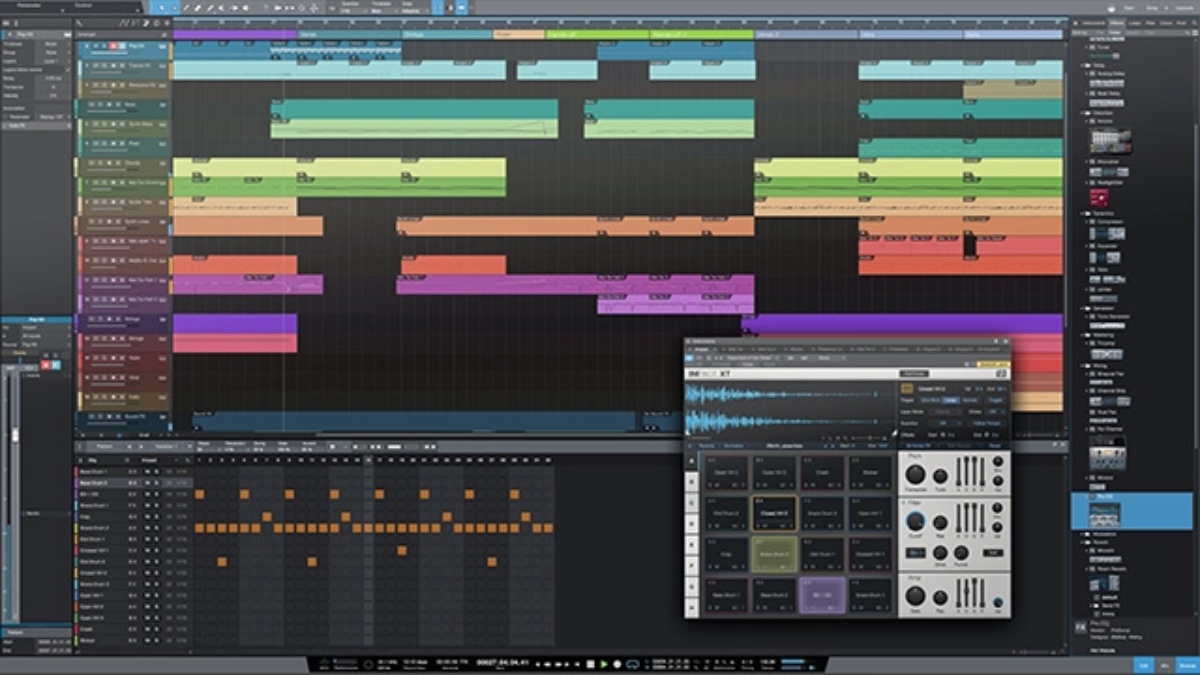 Studio One comes with a brand new Impact XT drum module, an improved version of the predecessor, capable of offering 20 new features such as beat quantization and real-time stretching.

On top of all this, Studio One also features multiple macro toolbars, improved multi-editing and external plug-in scanner.

Hindenburg Pro is cross-platform audio editing software, which works with Windows and macOS. Supplied with multitrack recording non-destructive, this tool can import 24-bit audio files and even work in 24-bit sessions.

In addition to this, the DAW is characterized by a large number of effects including compressors, EQ , volume meters, and support for third-party plug-ins. 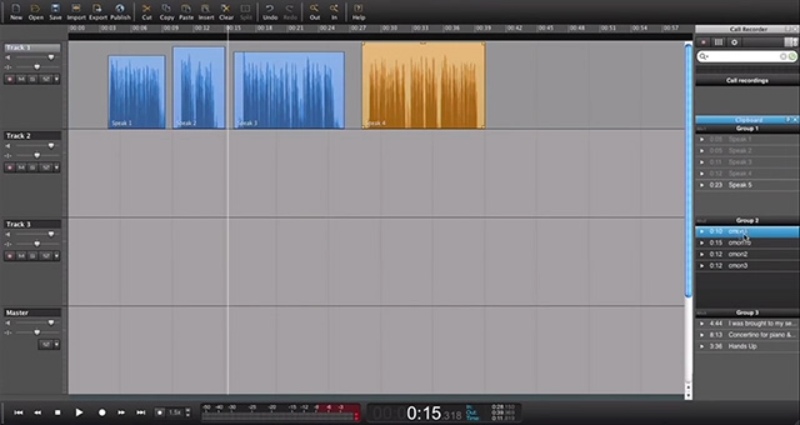 With the function of automatic equalization , the user can have the software automatically set their preferred voice profile. Once you have finished editing the audio, Hindenburg will allow you to export the project in a variety of formats , including mp3, AIFF and even Apple Lossless.

Ardor is a pretty powerful audio editing software, which just doesn’t work on Windows and macOS , but it also fully supports Linux, so you can use it on virtually any PC. 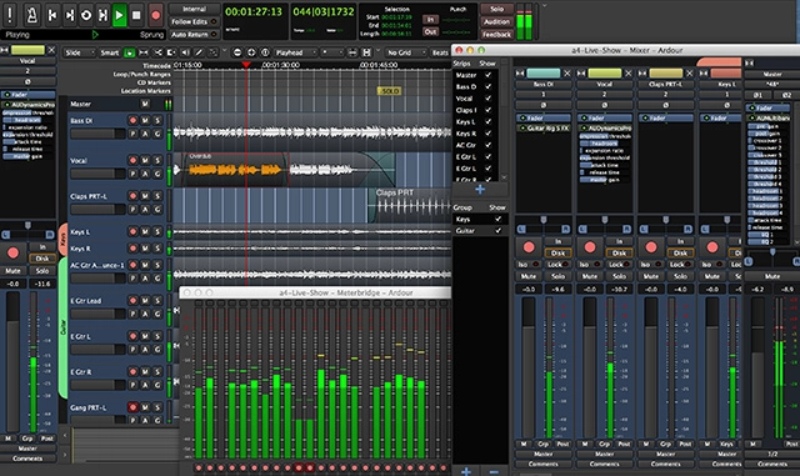 Ardor provides almost all the features you need for audio editing, starting with make recordings easier with microphones and MIDI devices, up to easily usable editing features such as cross fades , transposition, swing and more.

The software also has mixing functions included with the DAW, so you have access to EQ, automation, fader, monitor and more. The flexible mixer and hundreds of plug-ins make Ardor truly a great audio editing software.

Feature-rich and very intuitive, Avid Pro Tools also turns out to be among the best choices. The software probably has the cleanest audio editing interface , which can comfortably fit into any workflow. With the particularly fast recording engine and 64-bit mixing to boot, this tool can be considered good enough to boost productivity as well.

Pro Tools offers an efficient way to manage large sessions . For example, you can organize your tracks into foldable folders to work more flexibly. 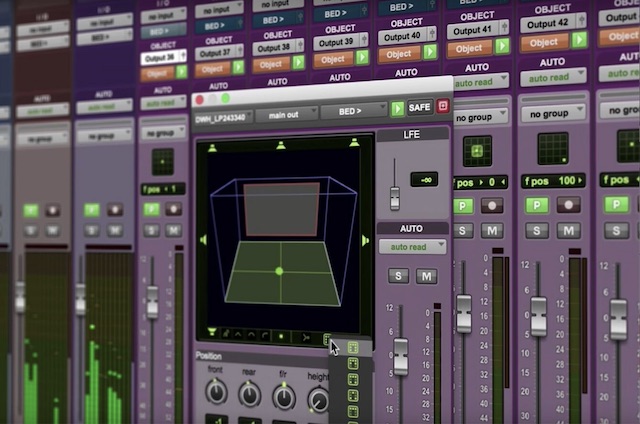 Pro Tools comes with UVI Falcon 2 (a highly competent virtual instrument) that allows you to create amazing sounds to say the least. In addition, the presence of a huge library, characterized by over 750 vocal audio tracks to create interesting mixes, is another notable aspect of this software.

In addition, Pro Tool also offers the possibility to listen to your own music on major music streaming services , including Spotify, Apple Music, Pandora, and more.

Avid’s Pro Tools is available in three variations: First (free), Standard and Ultimate. The free variant is for beginners, while the Ultimate version is specially designed for professionals. In terms of compatibility, this audio editor supports several formats, including MP3, S1, SD2, .aac, .M4a.

Magix Sequoia is audio editing software that knows how to excel in all major aspects, including audio production , post-production, broadcast and mastering.

In addition to knowing how to make really important features available, such as multisynchronous cutting, Sequoia provides a direct connection to the broadcast CMS and automation systems for a simplified experience. 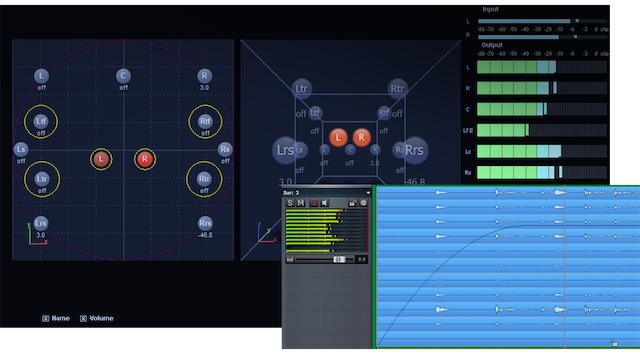 Equipped with a robust audio engine, the software allows you to edit files even during live recording , and it is undoubtedly a big advantage from a productivity point of view. Also in terms of mastering the software has a wide range of tools, including a powerful object editor, top notch plug-in and restore native audio.

As for compatibility, there is fully integrated OMF / AAF support, so you can exchange projects between all major programs and between platforms. Maybe the price is a little too high, but the features are really top notch.

Sound Forge is digital audio editing software that offers high-end tools for professionals , but it’s easy and intuitive enough for everyone. There are currently multiple versions of Sound Forge: the first is Sound Forge Pro 14, while the other is Sound Forge Audio Studio 15. 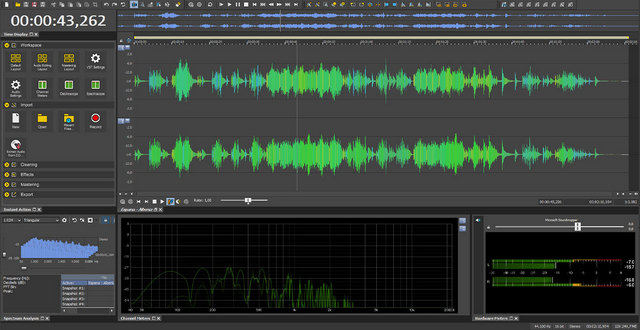 Audio Studio is instead aimed at enthusiasts and provides tools to record, edit, restore and burn songs and audio files with professional effects.

With Sound Forge Pro users will be able to record, restore and edit audio material of the highest quality. The tools available are truly professional level: there is no shortage of innovative editing functions and high-end plug-ins to create virtually perfect broadcast, CD or streaming masters. Sound Forge offers support for high-resolution audio, including 24-bit, 32-bit, 64-bit at 192kHz.